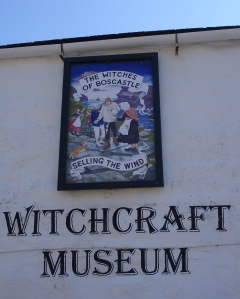 While I was in Cornwall last week I couldn’t miss out on the opportunity to visit the Museum of Witchcraft in Boscastle.  When I started writing Beltane I borrowed an introductory book on witchcraft from York library (which did result in some interesting looks from the library staff). Four years on I now own a wide selection of books on witchcraft and druidism, subscribe to Pagan newsletters and have interviewed practising witches and druids as part of my research.  I’d heard really good things about the museum and I was pretty excited and intrigued as to what I’d find as I drove over to Boscastle.

The museum started originally in the Isle of Man in 1951 and moved to its present location in 1960.  The collection spans a wide range of objects connected to the history and practice of witchcraft. 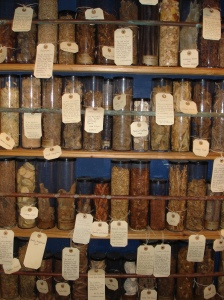 As I’m currently writing about a character who was a renowned healer, I found the section on healing and herbalism really interesting and it’s given me a lot of new ideas for my new book, Lughnasa. 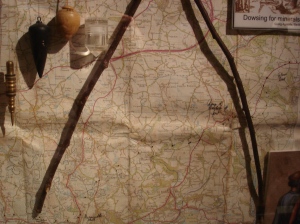 While writing Beltane I became increasingly fascinated with earth energy and ley lines and I read ‘The Sun and the Serpent’ by Paul Broadhurst and Hamish Miller which is about dowsing the Saint Michael Line across the south of England.  The authors visited a number of places that I wrote about in Beltane including Glastonbury.  The museum has the dowsing rods and OS map used by the authors in their research. 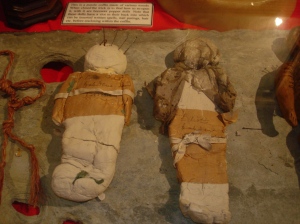 I’d read about poppets (and I included some of these in Beltane) but I’d not actually seen any in real life.  Poppets are used in spells and can be used to harm or to heal. There’s a number in the museum and I found them a little freaky.  These were used in curses and the names of the person that the spell is directed at is written on the doll.

Witch bottles can be used as protection from curses and to drive the evil back to the perpetrator.  Traditionally they contained pins, hair and urine.  This confused me a bit as in my research I’d read about pins, needles and herbs being used for this purpose.  If anyone can explain the different contents then I’d be very grateful.

I learned a huge amount at the museum and it was hugely helpful to see objects that I’d previously only read about.  I came away with a whole load of new ideas for my writing and also some helpful advice should I ever get married!

7 thoughts on “Museum of Witchcraft”