Something odd happened to me today.  Something that hardly ever happens. I had an overwhelming urge to have a clear out.  And then, what’s more surprising, I actually did it. I’ve spent most of the day chucking things out, going through piles of paperwork, shredding (which I really hate) and tidying up again.

For the first time in about five years I can now get into the cupboard under the stairs.  You would not believe the stuff I found in there.  An unopened bag of 100 night-lights, 4 Christmas crackers from heaven knows how long ago and a bottle of Guinness with a best before date of 2009! 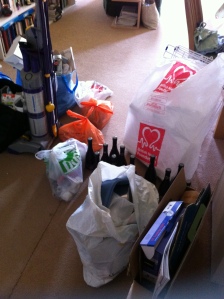 I felt a bit bad then. What kind of rubbish housekeeper am I to have beer that’s 5 years out of date?  And then I remembered what I’ve been doing with the time that I used to spend cleaning and doing DIY.  I’ve been writing.

Last week my friend Jessica and I were talking about the sacrifices that we’ve made to write.  She said that she no longer has time to watch TV.  I still find time for a bit of television though I watch a lot less than I used to. What I’ve given up are long lazy Sunday mornings reading the newspapers and being house proud.

But today the clearing out felt good.  Really good.  Because once I started it was obvious that I was more than ready to chuck out the things that reminded me of the old job that I hated and the relationship that didn’t work.

I’ve been re-reading Secrets by Freya North this week and I think that might have been what inspired me.  At the beginning of the book the heroine, Tess, clears out the hero’s home.  Eventually that helps him to move on and, about two hundred pages later, to realise that he loves her.

While I was ferrying bags of paper to the recycling bin and using the lousy shredder I was thinking about my new novel, Lughnasa.  I’m about 30,000 words in and I’m starting to be able to see the shape of it now.  But next week I’ve got to crack on with editing what I’ve done so that I can send my partial manuscript to be reviewed under the New Writers’ Scheme run by the Romantic Novelist’s Association.  The deadline for submission is 31 August so I’m fast running out of time.

But it’s so hard to stop writing and start editing. Writing’s the fun bit.  Editing’s hard graft. Yet that’s what I need to do.  And like I’ve been doing today I’ve got to be prepared to be ruthless and let things go. I don’t think the current version of the manuscript is as much of a mess as the cupboard under the stairs was but it’s time to find out.  Wish me luck!

3 thoughts on “Out with the Old”