I fell in love with the tiny town of Stromness the first time I visited back in 2010. I’d read the books of Orcadian poet, George Mackay Brown (who lived all his life in Stromness) long before my first trip to the islands and I have this slightly whimsical idea that, through his words, the town was in my soul before I got there.

I’ve stayed there twice now.  It’s not very big, with only around 2,000 residents which means you quickly start to see the same faces again and again and, as people are very friendly, they soon start to nod and say hello.  The main street is very narrow, barely wide enough to get a car through in places and any walk through the town involves a lot of stopping and waiting for vehicles to pass. 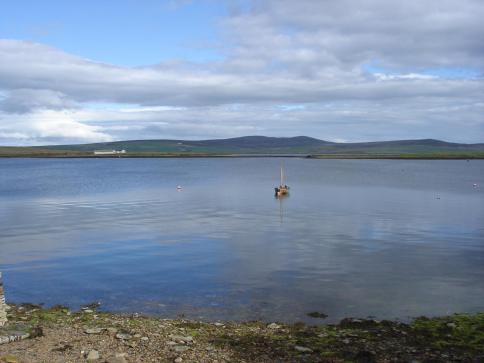 Stromness is a town of the sea. It’s at the head of an inlet (or voe) which runs out into Scapa Flow.  The houses are grey stone and, because the wind is so strong and so persistent in Orkney, they’re built with their gable ends facing the water. Many of them have their own pier or slipway so that the inhabitants could easily take to the water to sell goods to the ships that stopped there. Stromness was the last stopping off point for ships crossing the Atlantic or, if you were on your way back, the first land fall.  Captain Cook’s ship ‘Resolution’ stopped there on its return from Hawaii after Cook was killed. As a Yorkshire resident, with stories of Cook having been told to me since I was little, I found it fascinating to discover this link. The crew sold many of Cook’s belongings which resulted in Captain Cook’s tea service ending up at Skaill House in Orkney.

Despite its size, Stromness has an art gallery and a museum.  The art gallery houses mainly modern art and has some very cutting-edge exhibitions. It’s in a converted house and warehouse which has been adapted by judicious use of plate glass windows to make it a very modern space. There’s something very special about seeing art displayed with the sea beyond it as if the two are in conversation. The museum is a treasure chest stuffed with items which have been brought back by some of the town’s very adventurous residents.  Some of the finds from the Ness of Brodgar dig were on display when I last there. I like to think of Winston examining those stones and thinking deep thoughts about the people who created butterfly stones or carved stone balls.

When I was writing Storm Witch I decided Rachel would live there because she’d belong in a town that is so closely linked to the sea. The way the houses close in on themselves with narrow alleyways (known as lanes) between them suited her personality. For Hal it was a more practical reason, the wave energy project he works for is actually happening in Stromness (although I gave it a different name). I could see him there, relishing life in a small town after his years in Toronto.

I hope these photos give you a flavor of what the town is like and allow you to walk the streets and imagine gazing out across the water as you read Storm Witch.

Storm Witch is available as an ebook from Amazon now. The paperback will be available in early May.