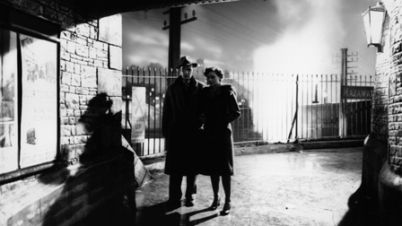 When I decided I was going to write a steampunk novel I rapidly realised that I had a bit of a problem on my hands. You see, I don’t really understand how steam works.   I get the elegance of it, the wonderful glamour of steam.  I can’t tell you how many times I’ve watched ‘Brief Encounter’ or ‘The Railway Children’.   But they don’t really get down to the nitty gritty of how a steam train works. And suddenly the nitty gritty was what I needed.

Now I know that many very successful steampunk writers don’t worry too much about all of that and merrily make things up with scant regard for the laws of physics.  But sadly, especially as I don’t even have an O’ level in physics, my brain refused to work that way.  Apparently if I was going to make stuff up, it had to have a basis in some kind of fact.  The only problem was that I didn’t understand the facts. 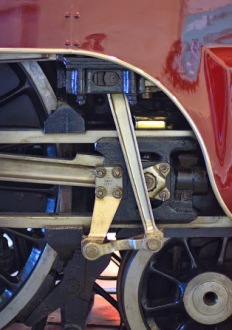 Fortunately I know a man who does.  My Dad loves all things steam and, having been taken to the National Railway Museum more times than I can count as a child, you’d have thought that something would have sunk in but no.  Which is why the last few months have found me doing things I’d never expected, reading books about Zeppelins, watching ‘Locomotion’ on BBC2 for a reason other than to look at Dan Snow and going to a steam fair.  I was dragged to these events when I was a kid and was bored to death.  Little did I think that many years later I’d be there asking questions and really trying to understand.

Unfortunately the understanding part didn’t go too well.  You see, we were starting from a very low base. My first question, when we’re stood on a makeshift platform looking down on a traction engine’s engine, was something like ‘So the coal heats the water and that makes the steam?’  Fortunately, my Dad managed not to laugh and, with much pointing and hand movements, tried his best to explain. I got some of it but then my brain simply refused to co-operate.  Somehow when I hear words like ‘torque’, ‘pressure’ and ‘propulsion’ it just drifts off to thinking about something else like cake or books or Aidan Turner. 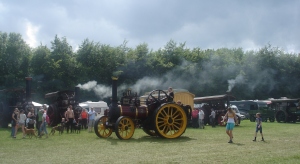 So in the end, when it came down to the writing, I still had to get on and make stuff up. I’m not one hundred percent sure it works yet but I have found myself becoming more and more fascinated by the world of steam.  Which I guess is what’s really important if you’re going to write steampunk. Just don’t tell my Dad or I’ll never hear the end of it!

I’ve got a Pinterest board for my steampunk research for my new novel which you can find here and has more photographs of all things steam related and some absolutely gorgeous frocks (honest, looking at them was research too!)

2 thoughts on “Putting steam into steampunk”