The winter solstice is the shortest day and longest night in the northern hemisphere. This year it falls on Thursday 21st December.  It’s also known as Yule or Midwinter.  The word ‘solstice’ means ‘sun stands still’ although that doesn’t actually happen.  The winter solstice marks the dying of the old year with the way being prepared for the rebirth of activity as the days begin to lengthen again. 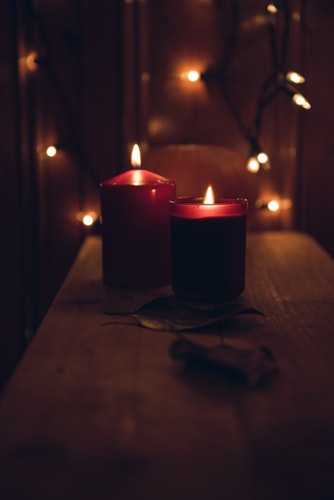 Winter is time of hibernation for many of us. It’s cold and dark outside so we spend more time inside.  This can lead to us directing our energies inwards and allowing the inner realms to expand as the outer world has darkened.  The solstice gives us an opportunity to come out of hibernation, to be loving, generous and sociable and to celebrate being alive.

Some days, when the light fades too fast, I find it hard to remember that the sun won’t always set at 3.30 in the afternoon and I think it’s really easy to forget in our time of electric lights and central heating, how terrifying this time of year must have been in the distant past.  This need to believe in the return of the light must be behind many of the rituals of fire and light that belong to this time of year. It’s believed that druids burned huge fires of pine and yew at the winter solstice to draw back the sun god from the underworld so that he could be reborn into this world.  The yule log which probably comes from Norse bonfires on the solstice, can be seen as a similar tradition.

I find it fascinating that the chambered tombs of Maeshowe in Orkney and Newgrange in Ireland are  aligned to the sun on the winter solstice.  As the sun sets on the solstice light shines along the entrance passage to illuminate the darkness of the tomb.  It’s impossible to know why the Neolithic people built it in this way but one of the theories is that it as the death of the midwinter sun marks the rebirth of the sun, the entry of the light into the tomb could have signified the continuation of life of the ancestors.

Evergreens have been used to decorate for centuries.  They were considered to symbolise fertility and eternal life.  In the Ogham tree calendar, the evergreen yew is the tree associated with the winter solstice.  However it’s said that mistletoe should not be brought into the house until New Year’s Eve which I find a bit confusing when there’s so much folklore about kissing under the mistletoe.

I will be celebrating this winter solstice with friends.  There’ll be a fire, singing and hopefully mulled wine.  Whatever you’re doing I wish you the very best.  Thank you for taking the time to read my blog this year.

One thought on “Winter Solstice – the Return of Light”

It was a great pleasure to be interviewed by Ev0ke magazine this month where I talk about stone circles, research and the possibilities of romance writing. https://ev0kepublication.com/issues/march-2021/alys-west/?fbclid=IwAR2ot8_3Gg0WdTln-Viot_LKgr39VOUS_Nkfr-4GTDPgZkR_X7ntVec0flE
Happy St David's Day!⠀
Thanks for watching my video. I hope you can tell how passionate I am about mindful writing and how much it can help with wellbeing, especially at the moment. My mindful writing sessions run on Mondays and Wednesdays at 6.30pm (GMT). The cost is £5 per session. If you’d like to join you’ll find all the details on my website 👉👉wwww.alyswest.com/mindful-writing ✍️🌷💜 #mindfulwriting #mindfulness #dailyinspiration #lockdowninspiration #writersofinstagram #thislittlemoment #noticebeauty #writersofinsta #journalling #writewithme #shineyourlight #beautyeverywhere #writingthespring #creativewriting #writingforwellbeing
Snowdrops. It’s wonderful to see these first signs of spring when I’m out walking. #snowdrops #snowdropseason #springiscoming #smalljoy #smalljoysoflife #lockdownwalks #capturethemoment